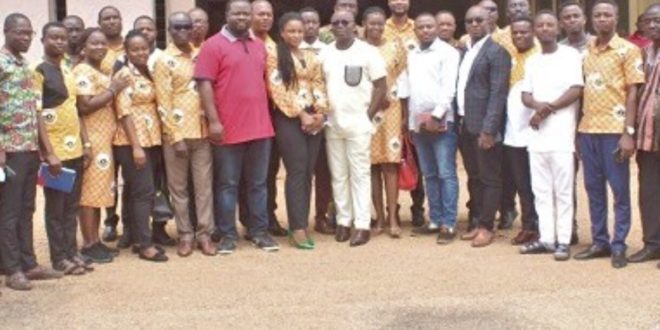 About 100,000 graduates are to undertake their mandatory one-year national service, beginning November 1, 2022.

Out of the number, about 20,000 will be posted to the private sector, in line with efforts by the management of the National Service Scheme (NSS) to generate more internal revenue to become self-sufficient.

The Executive Director of the NSS, Osei Assibey Antwi, who announced this, said as of last two weeks,16,000 graduates had been earmarked for posting to the private sector, following the increasing demand by the sector for the services of the personnel”.

He was speaking at a staff meeting in Sunyani last Friday during a working visit to the Bono Region as part of a nationwide tour to interact with regional and district directors of the NSS to enable him to identify their challenges, so that, together, they could find solutions to them.

See also  Have a mindset of possibilities – Bawumia to Ghanaian Youth

The meeting was attended by regional and district directors of the scheme in the Bono, Bono East and Ahafo regions.

Per the rules and regulations of the NSS, allowances of personnel posted to private companies are paid by those companies.

In addition, the companies pay a service charge, equivalent to 20 per cent of their basic service allowance, monthly by payment order to the NSS Secretariat.

The posting of personnel to private institutions is made on request and the acceptance of the conditions.

Private educational institutions are, however, exempted from paying the service charge to the secretariat.

The executive director charged the regional and district directors to be more creative and innovative to help generate more revenue to sustain the scheme.

He said his outfit had created a mobilisation unit to take care of its revenue generation, adding: “You should be creative and innovative enough to be able to know where money is.”

Mr Antwi also urged the directors to identify private companies and institutions in their respective districts to sell the idea of using service personnel to support their establishments, saying that was cost-effective.

According to him, the restructuring process had become necessary to make the scheme relevant to attract more funding from institutions and organisations.

He gave an assurance that the regional and district offices would be equipped to enhance their operations, saying: “You will only be vibrant when you are well equipped to execute your mandate.”