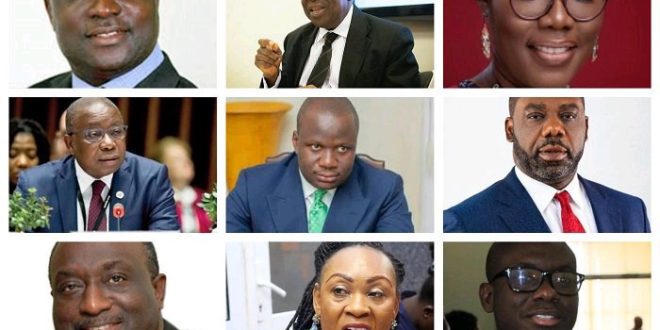 The President, Nana Akufo-Addo, on Friday gave the clearest warning to his Ministers aspiring to succeed him to “focus on the job” he has given them “or quit now to pursue” their “presidential ambitions.”

This warning came last after Cabinet meeting ended late Friday night and was followed by a political session.

There is growing anxiety within Government and the ruling party over campaign activities of but a very few members of Government who are aspiring to win the nod as the New Patriotic Party’s presidential candidate for 2024, an election which is three years away.

The President reminded the aspirants in his government that not even the 17 NPP candidates who contested for the 2008 presidential slot, including nine who were in the Government in 2005, were seen to be actively campaigning within the first year of the second John Agyekum Kufuor administration.

The President criticized the premature move of the few hopefuls in his government. The President effectively described it as selfish and irresponsible for aspirants to allow their ambition to get in the way of their ministerial job within the first year of a sitting President’s second and final term.

His warning came a day after the Steering Committee of the New Patriotic Party met at the party headquarters to discuss this very matter among other pressing issues as the ruling party is about to embark on a series of elections for party executives from the constituency, through regional to the national level.

The riot act, outlining what is expected of every Minister in the Akufo-Addo administration was read to the Ministers at the Friday meeting by the Secretary to the President, Nana Asante Bediatuo. This was followed by a spirited no-words-mincing warning from the President that he would sack any Minister who defied his orders.

Cabinet was shifted from Thursday to Friday because of the funeral of the late statesman and leading architect of both the Provisional National Defence Council (PNDC) and the National Democratic Congress (NDC), Capt (Rtd) Kojo Tsikata.

Earlier at the NPP’s steering committee meeting Thursday night, the issue of billboards of aspiring candidates popping up across the country was also roundly condemned as “vulgar”, conveying a wrong, loud impression of misplaced priority.