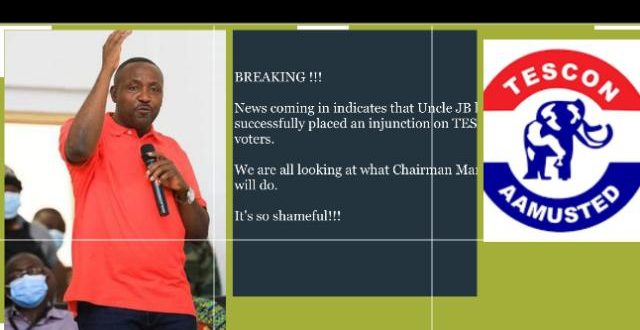 RE: John Boadu Has Never Placed Any Injunction On TESCON Voters

We are shocked and scandalized by the dumb, lame and irrational propaganda circulating that Mr. John Boadu has placed an injunction on the Tescon Voters.

First, they said HE Nana Addo was paying a top-up fee on behalf of John Boadu but Ashanti Region was excluded from the President’s motivation. This never had the attention they needed. It is sad that these characters are doing all that they can to tarnish the image of our dear President after raising a lot of untrue stories about John Boadu.

We want to state categorically that all these allegations are untrue. In fact, they are baseless and meaningless.

Mr. John Boadu has no interest in placing an injunction or whatsoever on any voter. He believes in his delegates that they shall renew his mandate as the General Secretary of our dear Party.

We hereby wish all the delegates and the public to disregard these fallacies.

JB remains focused and determined of maintaining his position to serve his great Party.