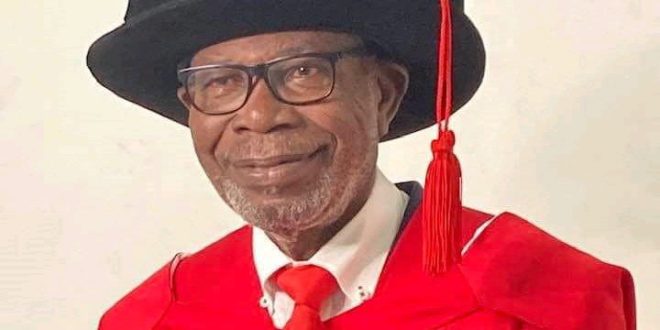 Ghanaian Diplomat and a member of the New Patriotic Party (NPP) Dr. George Ayisi-Boateng graduated with a Ph.D. from the University of Witwatersrand, South Africa has named Asantehene Otumfuo Osei Tutu II for paying his fees.

‘Onipa Nua’ as widely known by residents of the Ashanti Region on Kumasi- based Opemso Fm Kwantannaso show hosted by George Opoku Mensah monitored by Heroesghnews.com, he disclosed that the encouragement and support of the King is what has propelled him to his current status on the educational ladder.

“Thanks to Otumfuo Osei Tutu II for his words of encouragement. He paid my school fees in my quest to seek higher education. What he has done for me, my family and I are grateful to him. I have not officially gone to outdoor my Ph.D. to him but I am sure he has heard and at the right time I will avail myself”, he revealed.

See also  There's Too Much Hardship In The Country, Put Better Measures To Flee Ghanaians: NDC To Government.

He urged Ghanaian youth not to relent in their quest to seek higher education irrespective of the challenges that come with it indicating that everyone has his or her time to come to the limelight.

“My father died when I was in primary three and I had 15 siblings. As a single mother, it was difficult for my mother to cater for all of us in school. Many of my senior siblings had to drop out of school”, Mr Ayisi-Boateng revealed

He went through problems before finishing Form 5 with a GCE (General Certificate of Examination) Ordinary Level (O-Level) certificate from the Benkum Secondary School at Larteh, Akuapem in the Eastern Region in 1968.

He started looking for a job after Form 5 and engaged in a number of jobs aside from private studies at the same time.

He succeeded in writing and passed the GCE Advanced Level (A-Level) certificate in 1994 while he was still working.

He had earlier told Graphic Online that his motivation to obtain a higher level was based on the fact that it helps to train a person in the chosen field, teaches the person to understand complex subjects, thinks analytically, and communicate very well.

As a politician and an entrepreneur, he had wanted to go back to school but always wanted to ensure that he sorted out his children first as well as others who were in need and whose plight had come to his attention.

So when he felt he was done with the children, and with the assistance of Professor Steve Sobotie, the then Principal of the Kumasi Campus of the University of Education, Winneba (UEW), who had then introduced a part-time evening Bachelors programme, he enrolled in 2005 for a first-degree course using his A-Level certificate coupled with his status as a matured student.

At that same time, he was a Board Member of the Tema Oil Refinery under President J.A. Kufuor’s government.

He took advantage of evening lectures and successfully completed his Bachelors in Business Administration (BBA) at age 64 in 2009 at the erstwhile Kumasi campus of the University of Education, Winneba (UEW) now Akenten Appiah-Menka University of Skills Training and Entrepreneurial Development (AAMUSTED).

He immediately enrolled in a Master of Business Administration post-graduate course at the KNUST for evening lectures and successfully completed it in 2011.

He was still not satisfied and proceeded to the University of Witwatersrand, South Africa and at age 75, he has graduated with a Ph.D.