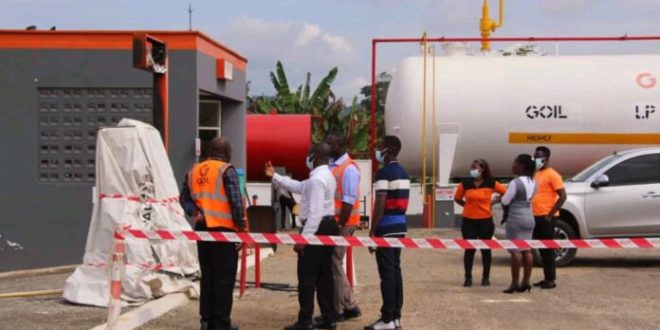 The Ghana National Fire Service (GNFS) has averted a possible gas explosion near Linda Dor Restaurant at Bunso Junction in the Eastern Region.

The fire caused by lightning gutted the gas dispenser pump during rainfall at about 10:30 pm last night Monday, 8th November 2021.

According to an eyewitness, the fire started spreading quickly but the timely arrival of Fire tender from the Ghana National Fire Service saved the situation after tirelessly dousing the fire and preventing it from spreading to the Pressure vessel.

The explosion of the pressure vessel would have been disastrous as the gas filling station is also close to the Goil fuel filling station and surrounded by a radio station, hotel, restaurant, shops and squatters.

The Manager for the facility, Benjamin Sam, narrating the incident to Starr News said he was happy the incident occurred at night.

“Yesterday in the night around 10:30 pm there was heavy rain and then we received a message from our officers on-site at the gas filling station that the gas pump dispenser had caught fire. So this morning we’ve come around to assess the situation together with engineers. It was fortunate for the incident to happen in the night.

If it had happened during the daytime properties and lives would have been lost. Because the gas station is close to a lorry station where petty traders used naked fire for their food around the gas station” he explained.

Additionally, there are activities of squatters mainly women who roast plantain as well as hawkers, traders and drivers who have encroached the compound of the gas filling station.

The situation becomes more dangerous whenever fuel or LPG is being offloaded into the storage tank.

Management of the facility said all efforts to get the squatters relocated by the Fanteakwa South District Assembly has not been successful in spite of several petitions sent.

“We have drawn the attention of the assembly to it, we’ve had engagements with executives of the transport owners, petty traders on the issue but nothing fruitful has come out. Officers of the Eastern Environmental Protection Agency are also aware of the situation. Currently, we have a petition to that effect with the Regional Minister. We don’t want a disaster to happen in the future” Benjamin Sam disclosed.

While some of the squatters are willing to be relocated considering the imminent danger, others rather want the gas filling station relocated because the place is a source of their livelihood. 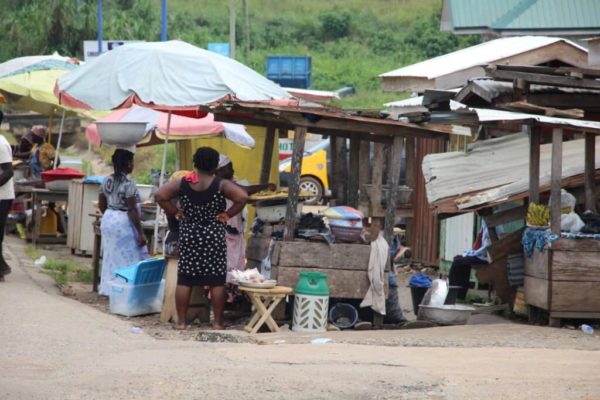