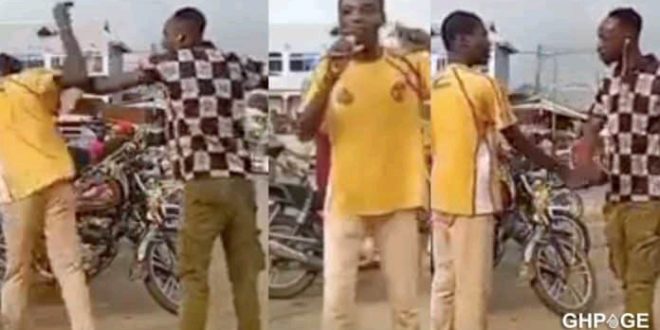 For preaching against idol worship, a street preacher was beaten up on the street.

The preacher and his assistant were seen preaching the word of God on the street in a video shared on social media.

A few minutes into the video, the main speaker, a young man, began preaching against idol worship, urging everyone involved to repent and begin following Christ.

Another young man approached the preacher, enraged, and inquired as to why he was speaking out against idol worship.

See also  Peace Fm Kwame Sefa Kayi is now a Board Member NPA, SEE PHOTOS of other Members on the Board.

He began slapping the pastor without waiting for him to explain himself, while the second preacher stood by and watched.

The assailant was overheard questioning when the pastor grew up and realized idol worship was a bad thing to do.

Watch the video below:

Previous FAQs on The E-Levy Published, Download and Get Copy
Next “my MP told me he received money from Npp over e-levy” Sammy Gyamfi discloses