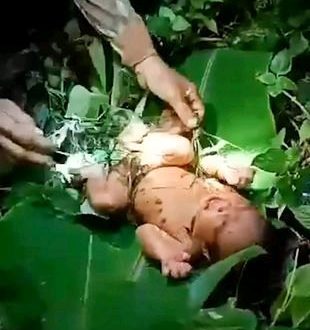 Aborted baby has been found alive in the bust at Atebubu Agric station, a suburb of Atebubu.

According to some eye witness, they heard the baby crying in the bush and they quickly called the nearby residents for help.

After searching the bush, they found the aborted baby alive.

They then sent him to Atebubu government hospital for better care.

They spoke to our reporter KWABENA MANU

See also  Sad Video, Photos As Newborn Baby Girl Found Alive In Forest With Worms, Inserts Crawling All Over Her

On her side, Madam Abigail Adu Poku who is the Midwifery coordinator for Atebubu Amantin Municipal Government hospital also confirmed that the little boy is doing well at their hospital.

She advised the ladies to take family planing if they don’t want any pregnancy at this time.