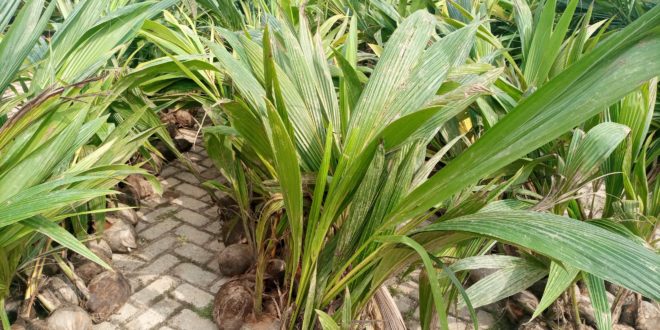 Sefwi Wiawso Department of Agriculture has distributed 6000 palm nut and coconut seedlings to its farmers within the wiawso municipality.

Speaking to Nattybongo when distributing the seedlings, Mr. Joseph Otoo, the Sefwi Wiawso Municipal Agric Director stated, that the planting for exports and rural development (PED) is one of this government’s priority to help getting other tree crops replace our cocoa which is fading off in our country.

He added that, depending on the climatic condition of the area, Sefwi Wiawso qualifies for this programme of which the assembly has been given palm and coconut tree crops since the climate suits them.

See also  Agricultural Products from Ghana are the Most Preferred in Neighboring Countries- Dr. Akoto

Mr. Joseph Otoo furthermore said, the government has been helping the assembly yearly with tree crops not less than 6000 for them to be distributed to the farmers.

Mr Otoo, continued that the agric extension officers in various operational areas were made to make the selections of those farmers who qualifies to be given the tree crops before they were distributed to them and added that the agric extension officers are charged to follow the farmers who have been given the tree crops to monitor and see to it that, the farmers are doing what is expected.

In an interview with Nattybongo, some of the beneficiary farmers also commended the authorities for such a good policy implemented.