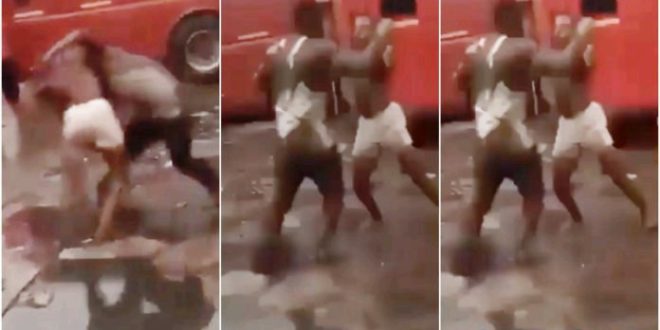 A viral video that has just surfaced online captures the exact moment a VIP Driver smacked a Trotro Mate to death.

Undoubtedly, it is a difficult task to sometimes control your temper but evidently, that is heavenly and mostly it should be exercised.

VIP Driver Trotro Mate Death
Tears As VIP Driver Smacks Trotro Mate To Death (VIDEO)
In the video privy to OccupyGh.com, the two broke into a fight following a misunderstanding.

People nearby refused to stop them from fighting, which evidently got very fierce.

As the fight intensified, the well-built VIP driver lifted the Trotro mate from the ground and smacked him to the ground.

He immediately passed out. One is heard shouting in the background “he is dead!”.