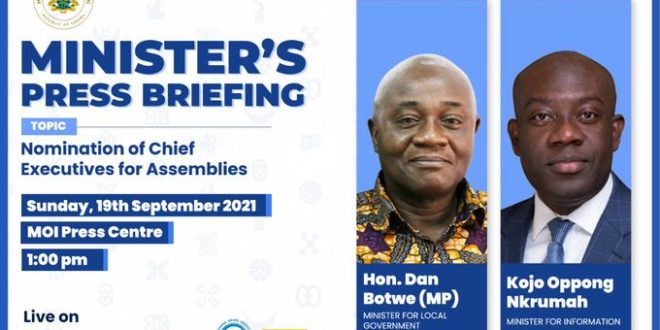 JUST IN: MMDCEs Appointment to be Announced on Sunday 19th Sept. @1 Pm- MoI

To NPP Supporters: Be Calm; Respect
MMDCEs List To Be Released Sunday 19 September – Ministry Of Information

The much-anticipated list of President Akufo-Addo’s appointees for the offices of metropolitan, municipal and district chief executives (MMDCEs) will be made public Sunday 19 September 2021 at the Information Minister’s press briefing, Heroesghnews.com can confirm. 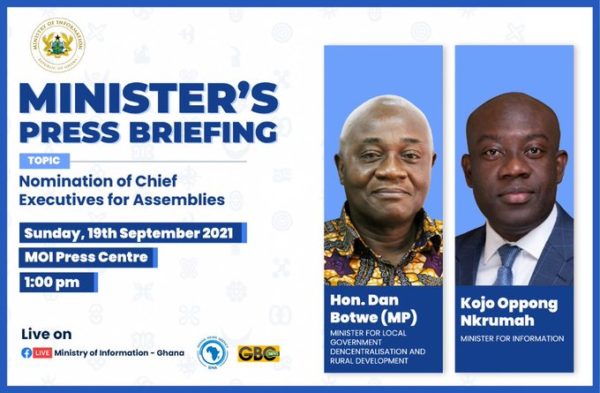 The Local Government Minister, Dan Botwe, will take his turn at the briefing to put out the official list he received from the President this week.

Arhin in his post confirmed that the President has finalised the list of nominees and that the Local Government Minister will soon announce the names.

All the latest information on the nomination of Chief Executives for Assemblies with Hon. Dan Botwe, Minister For Local Government moderated by @konkrumah

Expected appointments
The former Deputy Greater Accra Regional Minister in the first term administration of President Akufo-Addo, Elizabeth Sackey and thirty-six other women are expected to be named in the approved list of MMDCEs.

Sackey is tipped to replace Mohammed Nii Adjei Sowah as the Mayor of the Accra Metropolitan Assembly.

Retained MMDCEs
Some women MMDCEs who are tipped to retain their positions are Catherine Reckling, the District Chief Executive for Sekyere South District in Ashanti region, and Martina Appiah Nyantakyi, the Municipal Chief Executive Officer for Ahafo Ano North in the Ashanti Region.

New entrants
New entrants for the role of MMDCEs include Josephine Awuku Ansaa Inkoom for Ayensuano District, one of the 33 districts in Eastern Region, Anna Adukwe Addo for Tema West Municipal Assembly (TWMA), one of the 10 newly created MMDAs in the Greater Region and Zuweiratu Mada Nashiru for Chereponi District, one of the 260 Metropolitan, Municipal and District Assemblies (MMDAs) in the whole of Ghana.