Breaking News
Home / GENERAL NEWS / If Col. Damoah has been sacked, why is Labianca’s boss still on the Council of State? ~ Tamale MP Quizzes 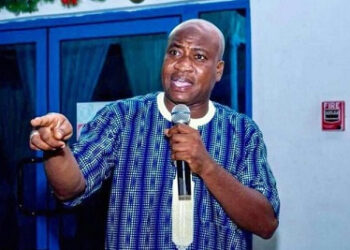 If Col. Damoah has been sacked, why is Labianca’s boss still on the Council of State? ~ Tamale MP Quizzes

The Member of Parliament for Tamale Central has questioned why the President Nana Addo Dankwa Akufo-Addo has not taken any action against the Council of State member Eunice Jacqueline Buah Asomah-Hinneh, who was the subject of the SP’s Labianca report.

Ibrahim Murtala Muhammed bemoaned the fact that out of all the persons implicated in the Special Prosecutors’ (SP’s) report, only the Commissioner of the Customs Division of the Ghana Revenue Authority (GRA), Col. Kwadwo Damoah, has been punished.

The Member of Parliament (MP), who made these remarks in a TV3 interview monitored by GhanaWeb, added that Col. Damoah, who the president has sacked from his position, was not even the subject of the Labianca report by the SP.

“Col Damoah was not the only person who was accused of wrongdoing. If fact if you look at the accusation, it is more to do with the deputy commissioner, Mr. Adu-Kyei, than Col. Damoah. Col. Damoah agreed that the actions taken by Mr. Aud-Kyei were actions that he was not in support of.

“Now you have Col Damoah being sacked. How about Mr. Adu-Kyei? How about all those who have been cited for engaging in wrongdoing? How about the woman who is still seated on the Council of State? The woman has been accused of using her position as a member of the council, for influence peddling, yet she is still at post. The president hasn’t asked the woman to resign,” he said.

The MP made these comments while reacting to President Akufo-Addo asking Colonel Damoah (rtd) to hand over his duties to the acting deputy commissioner.

In a letter signed by the Secretary to the President, Nana Bediatuo Asante, the notice of handing over is due to the expiration of his contract on October 13, 2021.

“The president thanks you for your service to the State and wishes you well in your future endeavours,” the statement read.

The report by the OSP, among other things, implicated officials of Labianca and the Customs Division of GRA for their various roles, which saw the company that deals in the importation of frozen foods benefit from a reduction in the company’s tax liabilities.

Eunice Jacqueline Buah Asomah-Hinneh, the owner of Labianca Company Limited and a Council of State member, was implicated in the report for influence peddling.

The investigative report indicated that the frozen foods company owner used her position to evade taxes.

Tags Col. Damoah has been sacked