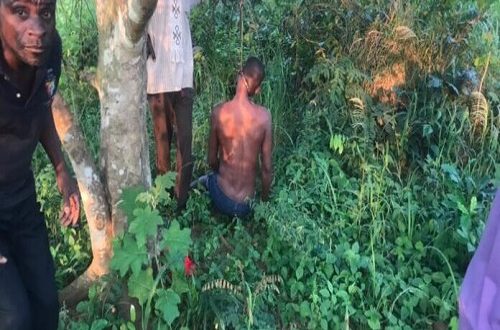 Man hangs himself on orange tree”

The deceased identified as Donkor alias Odo was found hanging on a rope made up of a mosquito net intertwined with a rag and other materials on an orange tree by some children who were playing football near the scene of the crime on Tuesday, August 17, 2021, at about 6:00 pm.

He was bare-chested and wearing only shorts.

Starr News has gathered that the deceased suffered a mild stroke some months ago but recovered after treatment.

However, he went to stay alone in a house leaving his wife and five children. He subsequently became addicted to alcohol.

Assembly Member for the area Samuel Abokyi told Starr News police from Adawso had come to convey the body to the morgue after preliminary investigation.

The deceased did not leave a note either communicate to anyone about his predicament which could be a possible cause of his action.

In July this year, a teacher identified as John Atta Asamoah Duodu (a twin) alias ” O-Level ” also committed suicide by hanging in his room in the same community over hardship having been lured into an online Ponzi scheme.