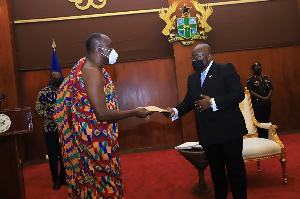 The Chair of the Council of State, Nana Otuo Siribuor has presented the findings of the Council on the bribery allegation and the petition filed by the Alliance for Social Equity and Public Accountability, ASEPA to impeach the Chief Justice, Kwasi Anin-Yeboah, to the President at the Jubilee House on Friday August 20.

“In line with the demands of the constitution as enshrined under Article 144(2), 122 (3), and in line with the decisions of the Supreme Court , Mr President we are obliged to determine whether a prima facie case had been made which determination would therefore precede the process of impeachment.

“Mr President the Council of State had made its findings and we are here to present to you the findings of the Council of state as to whether prima facie case had been made to warrant the start of impeachment process for the removal of the Chief Justice.”

The ASEPA had petitioned the president to invoke provisions of Article 146 to commence impeachment proceedings against the Chief Justice, Kwasi Anin-Yeboah.

The bribery allegations were contained in a response of a lawyer, Akwasi Afrifa, in response to a petition filed against him by his client at the disciplinary committee of the General Legal Council (GLC) that he may have been bribed to influence the outcome of a court case.

Although the Chief Justice has denied the accusation and asked the Police to probe the matter, ASEPA contends that the allegations have brought the name of the Judiciary into disrepute and cast a serious slur on justice administration in the country, hence the presidential petition.

Previous MMDCEs: Eugene Arhin’s address at Presidential Press Corps briefing will shock You, got people guessing. CHECK OUT
Next Sunyani: Quantity Surveyor/Footballer Fireman nabbed in possession of Human Heads in Fridge in his room.