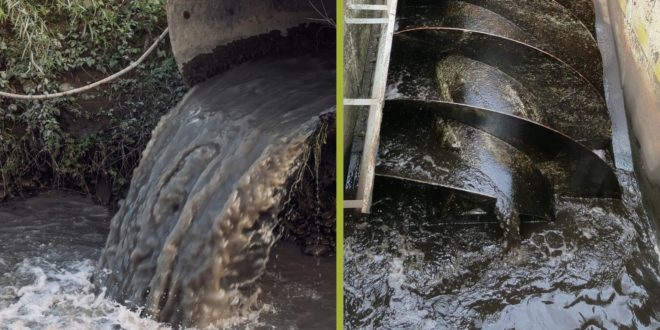 Residents of Community C a community just behind the Asesewa District Government Hospital are accusing the management of the facility for deliberately Diverting sewage from the Hospital Mortuary through their community creating health threat challenges to them.

They says that, they are disappointed in the way management of the have handled their concerns raised over the problem but no solution. They’ve reported to all avenue or quarters but no address.

They can stand the stench and the flies, Mosquitos that comes out as result of the uncontrolled sewage.

Also they have children who day in they out goes out to sep into the sewage by playing or for any. They used to have toilet spilling from their septic tank of the hospital as well. But currently has been addressed.

The situation is a big problem and a serious health threat to them and therefore needs authorities responsible and above management of the hospital to intervene since all the engagements had between the residents and the management fell into deaf ears.

The Assembly man for the area, Community C Mr. Simon Atterh also confirmed the situation as he has over been visiting the community anytime he’s informed over the massive stench from the sewage. He also added that, anytime he engages the management of the hospital and the Upper Manya krobo district Assembly, they also complain of Financial challenges.

The mortuaryman of the facility with name withheld answering questions from the Administrator of the facility, Mr. Richard Owusu said, the concerns raised by the residents are all lies. There’s no mortuary sewage running Through or around their community currently. He admitted that, previously there was. But under the administration of Mr. Richard Owusu, it has been addressed.

The sewage they see on the compound of the mortuary is not the bath water of the Corps but rather, water used for scrabbing the mortuary. With that, it has been channeled to a direct area and not to the community as they claimed.

Also appeal to management to Wall the mortuary because some residents have used the place as bypass which is unfair and unfortunate.

And he believes that when that is done, it will address the concerns of the residents.