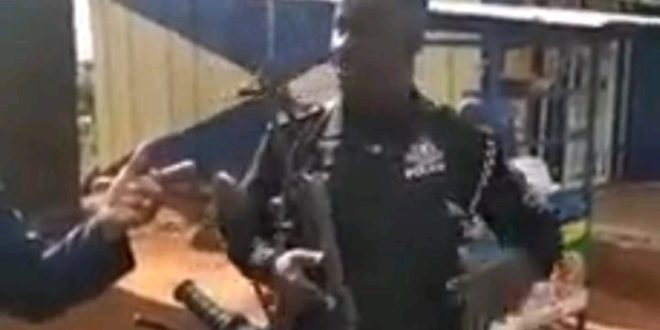 A policeman attached to the Formed Police Unit (FPU) dispatched to undertake an operation at Atwima area in the Ashanti region exhibited gross indiscipline to a senior police officer.

Information gathered by DGN Online indicates that the purported incident occurred at Atwima Yabi-Dida in the Ashanti Region where the junior policeman who identified himself to be attached to the Formed Police Unit (FPU) was seen daring and harassing his superior officer.

The Cpl Boakye can be seen vehemently challenging the orders of the senior officer, asking Supt Quansah to do whatever he wanted to do because he was disgracing himself.

Part of the video also showed, the policeman refusing the instructions of the senior officer who is believed to be a commander as he even asked the senior officer to meet him at the FPU because he did not deploy him on the mission he is embarking on.

See also  Like Desmond Tutu, Let's be the voice of the voiceless- Mahama.

The junior officer said in the video when the commander requested for his service number, “This is my name tag. Meet me at FPU. You were not the one who brought me here.”

He left the scene in few meters when he further stated that “You’re disgracing yourself. You came to meet us trying to arrest a thief and you are giving us all these commands.”

However, the senior officer continued to remain calm and asked who was in charge of the team.

He then moved to meet the in charge who happened to be an Inspector and directed them on how to conduct the operation.

But the senior officer promised to deal with the junior officer, indicating that “if you know what will happen to you, you will keep quiet.”

Apparently the FPU personnel were undertaking motor checks against their mandate which the senior officer advised them against.

Meanwhile, DGN Online gathered that the Ashanti Regional Police Command has begun investigations into the incident.